I put together a short story collection called Darker Than Blue, Volume 1: eight stories from the city. It’s available now for $5, which gets you 62-page PDF and epub versions of the work. Darker Than Blue contains eight stories about crime, violence, paranoia, grief, joy, and family in the city, and one story about Sun Wukong contemplating murder on a mountaintop. The book design, layout, and lettering is courtesy of my old Image Comics collaborator Sasha Head, while the cover is by East of West’s Nick Dragotta. This is the prologue: 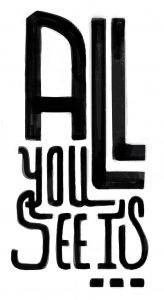 The city ended up the way it did thanks in no small part to certain actions taken in the Summer of 1974, right around the time Nixon resigned. Six men died that summer, a number that pales in comparison to the city’s quadruple-digit body count that year. While their names will never appear in any history book, their deaths marked a turning point in the landscape of criminal activity in the city.

Two years prior, a young boy named Harrison was struck and killed when a gunfight broke out near a friend’s home uptown. The conflict was part of a series of running turf wars that were beginning to bubble up around the city. Three of the men, representatives of a local penny-ante racketeering operation, wanted to prevent two of their rivals taking over, and the most expedient way to do that was to force them out. The sixth was a tame cop, one who was interested only in making sure the newcomers got what they wanted and that he got paid, not in that order. The boy was nothing more than collateral damage, and the cop made sure that his death went unsolved when the investigation into the shooting began. No suspects, unreliable and tainted witness reports, and no arrests meant that it was just another night for most everyone in the city.

That summer, Rosaline Baines, mother to Harrison, enlisted Shawn Jenkins, a relative who served with her late husband in Vietnam, in her mission: kill all six men to balance the scales. They succeeded, though Jenkins lost his life finishing the job. After, Rosaline quietly returned to her life, raising three daughters, eight grandchildren, and twelve great-grandchildren before she died. She raised a family of teachers and activists, musicians and artists. They grew up ignorant of their mother’s sin, but unknowingly lived through the aftermath.

She never understood the full repercussions of her actions, but Rosaline’s hate made waves. The men were not high-up, they were not important men by any means, but they were significant enough to be missed. Each man ran or worked with a smaller gang of men and boys in addition to representing a greater organization.

Rosaline’s actions disrupted a delicate ecosystem in the city. The death of the cop gave the police an excuse to crack down on urban violence with increasingly militarized equipment and strategies. The police, already no friend to the majority black communities in the city, began to shoot first and justify their actions later, if at all. The death of the other men created two different power vacuums, one that left their crew leaderless and another that left their organization on its back foot and desperate to regain its former strength. The crews splintered, splintered again, and eventually went to war in the streets. Their former masters made a futile effort to regain control of their charges while the cops cracked every black and brown head in sight.

By the spring of ’75, the city was burning. Newspaper editorials demanded government intervention. Politicians found a toehold and dug in, eager to show how tough on crime they really were. The city was on track for its highest crime rate in years, with records being broken seemingly every month. Small business owners fled first, rising insurance costs eliminating the free-falling rents in the area, and a significant portion of the city’s whites soon moved to a neighboring town.

When summer arrived, crime suddenly plummeted to lows not seen in years. The police were baffled. Their strong-arm tactics worked, they believed, but the result was unprecedented. The streets went from noisy to quiet over a period of mere weeks, barely more than a month. Rumors swirled: secret police death squads, assassinations, bribes, and buyouts. The police expected a flashy new player to step in, another target to be knocked off its perch. Nothing materialized.

Outside of the eyes of the police, however, was another story. Months of machinations by persons previously unknown paid off, and the vast majority of the city’s criminal element found themselves under the control of one organization, which was itself controlled by a small coalition of men and women. Word came down quickly: settle the violence, keep the peace for a while, and we’ll make money for decades. Provide a few sacrificial lambs, eradicate the snitches, and the city is ours. Invest in politicians, in education, in the community, and we’ll be unstoppable. Resist, and the best you’ll get is a closed casket funeral in a potter’s field decades down the line, when they finally find what remains of your body.

Now, almost fifty years later, the organization had fully infiltrated several aspects of life in the city. The politicians that weren’t on the take knew that more than a few of their fundraisers and supporters had ties to crime. Undercover cops were tolerated until they ran afoul of the wrong profit-seeking venture and were ejected, not killed, from their top secret operations. A little give-and-take kept everything running smoothly. The cops got to hit their marks for the year and the crooks kept the dope moving and the streets under control.

The organization cracked down hard on random violence. Street gangs were annexed as soon as they formed and unleashed with better tactics, training, and discipline. There were rumors of a popular and expensive youth center in the hood that doubled as a front for recruitment, high schoolers used as muscle, and a veritable army of orphans who were adopted and trained to use their fists, sticks, knives, and guns in the pursuit of profit, not to mention the veterans who enlisted for a better life and came home with the best of Uncle Sam’s tactics lodged inside their head.

White flight eased as the decades passed, though the city remained overwhelmingly non-white as the black, Asian, and Latinx populations eventually reached parity. It’s one thing to fear for your life and your business on a daily basis, but if the crime is limited to happening over there, to them, then maybe the risk was worth it. There was a lot of money to be found in the city for anyone who had an eye toward profit.

Segregation was built into the DNA of the city. The further north you went, the closer you got to the Neon, a ten-block district of nightclubs, bars, music venues, and conspicuous consumption. The further south you went, the worse things got. Toward the middle was a tug-of-war between the rich and poor, both angling to push the other out of their neighborhoods as soon as possible. But it was stable. It worked as intended.

The city was ringed by a route on the light rail system that most natives called the O or Loop. It was a project that began as a triumph of city-planning but was soon outpaced by the growth of the town. The Loop surrounded most of the city, forming a perimeter that touched almost every single major district. Supplemental trains and buses covered the rest, spider-webbing across the city. For a dollar fifty-five, you could loop from blight to the Neon or vice versa in about thirty-minutes. Everyone that didn’t drive used the train, and everyone that didn’t use the train or drive never left their neighborhood.

Most people in town have one goal: don’t rock the boat. The city works. Keep it that way. It became a vibrant and up-and-coming place, a place where a family could be raised with a certain amount of care and jobs could be found no matter your skill set or education on one side, and those with certain skills or temperaments could thrive on the other. The penalty for Heaven was just a bitter taste of Hell now and then.

You can buy Darker Than Blue on Gumroad.